This year’s crypto scam revenue topped $7.7 billion, up 81% compared to 2020, according to the blockchain data platform.

Compared to 2020, this year’s crypto scam revenue increased substantially, although still not topping the all-time high reached in 2019.

The report singled out the Finiko Ponzi scheme, which targeted Russian speakers throughout Eastern Europe, taking in more than $1.1 billion from victims in 2021.

“While total scam revenue increased significantly in 2021, it stayed flat if we remove rug pulls and limit our analysis to investment scams–even with the emergence of Finiko,” read the report.

According to Chainalysis, this indicates that there were fewer individual scam victims, while the average amount taken from each victim increased.

The emergence of rug pulls

In 2021, rug pulls plagued the DeFi ecosystem, and netted over $2.8 billion worth of crypto from victims.

Rug pull is a fairly new type of exit scam–typically orchestrated by project insiders, who drain the funds from the liquidity pool–causing the token’s price crash. 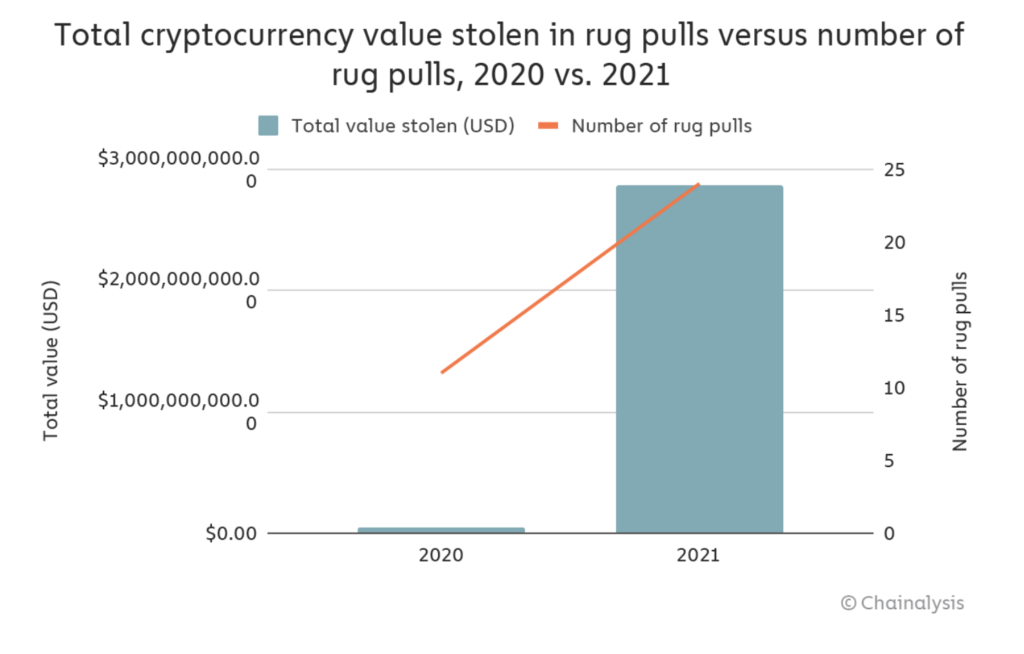 “It’s important to remember that not all rug pulls start as DeFi projects,” noted Chainalysis, pointing to the biggest rug pull of the year centered on Turkish CEX Thodex.

The Thodex scam, in which users lost over $2 billion worth of crypto, accounts for nearly 90% of all value stolen in rug pulls this year.

All other 2021 rug pulls began as DeFi projects, with AnubisDAO and Uranium Finance counting as the biggest scams in the category.

The report noted that the average lifespan of financial scams continued to be shortened, which could explain why “the number of financial scams active at any point in the year–active meaning their addresses were receiving funds–rose significantly in 2021, from 2.052 in 2020 to 3.300.”

“One reason for this could be that investigators are getting better at investigating and prosecuting scams,” noted Chainalysis.

According to Chainalysis, another thing that changed this year is the long-standing statistical relationship between crypto prices and scamming activity–suggesting that the crypto sector is maturing.

“Scams typically come in waves corresponding with sustained price growth in popular cryptocurrencies like Bitcoin and Ethereum, which typically also lead to influxes of new users,” read the report, noting that scamming activity spiked following bull runs in 2017 and 2020.